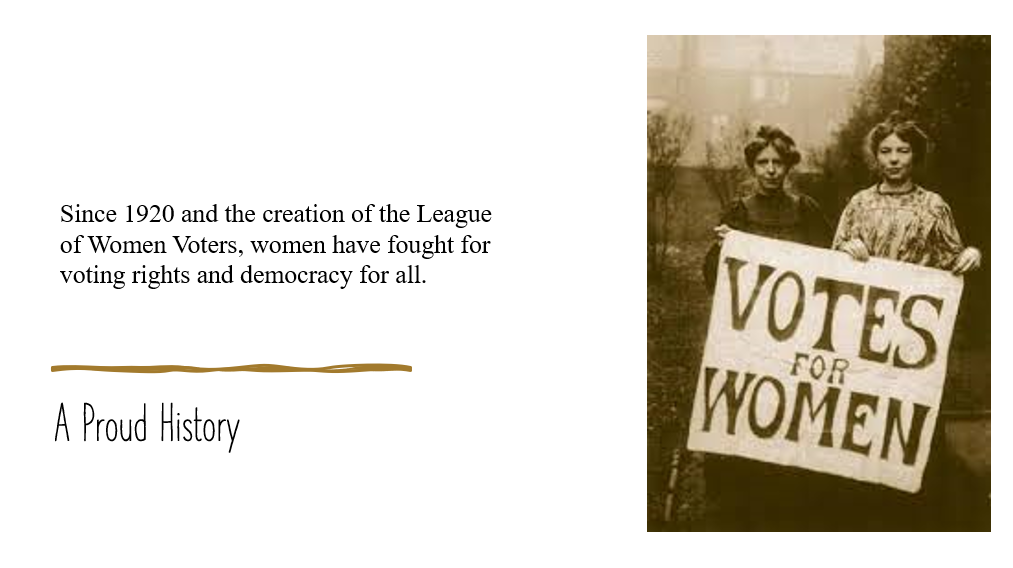 For over 60 years our League of Women Voters of Baltimore County Maryland, has been relied upon to maintain a non-partisan posture in local, state and national politics. The public has learned it can depend upon us for unbiased information in any election contest. Our passionate, tireless volunteers are dedicated Defenders of Democracy, who put their formidable skills and extensive professional knowledge to work everyday, underscoring the critical relevance and vitality of an informed and active citizenry.

Our value statement emphasizes the belief “in the power of women to create a more perfect democracy."

We believe our government is responsible to its citizens, to “maintain an equitable and flexible system of taxation, promote the conservation and development of natural resources in the public interest, share in the solution of economic and social problems affecting the general welfare, promote a sound economy, and adopt domestic policies which facilitate the solution of international problems."

The fight continues in Baltimore County 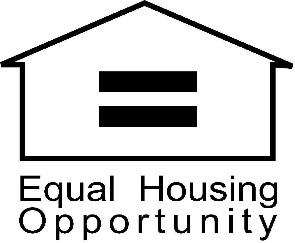 With the full support and advocacy of League of Women Voters of Baltimore County and the Baltimore County Voters for Fair Housing, the Home Act was finally passed! The HOME Act (Housing Opportunities Made Equal) addresses a difficulty that some county residents face – being turned away from rental housing solely because of the source of their income. This legislation will open housing opportunities throughout the county by giving all residents – including those with Housing Choice Vouchers – a fair chance to have their rental applications considered.  It does not prevent landlords from verifying applicants’ incomes or checking their rental histories. For working families, it reduces the time it now takes to find housing and make it easier to move closer to work.

Read our testimony from the October 27, 2019 County Council Meeting.

2018: Our most important contribution to date. 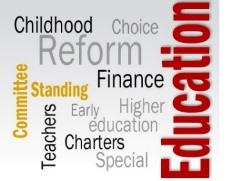 The Education Committee spent almost two years interviewing teachers, parents, administrators, politicians, former school board members, union members, people of color, the president of the Montgomery County Board of Education—the oldest “elected” county board-- along with other presidents of both appointed and elected boards.  In 2010 the Education Committee compiled the information and shared it with the membership along with the pros and cons of elected, appointed and hybrid boards of education.  Consensus meetings were held and LWVBC adopted a position in favor of a hybrid Board of Education—part- elected, part- appointed.  It was felt that having some members of the Board elected would force the Board to be more transparent and communicative.  On February 9th, 2011, LWVBC Board of Directors approved a consensus in favor of changing the Baltimore County League of Women Voters’ Board of Education support position from that of an appointed Board to that of a hybrid Board.

Finally in a “cliff-hanger” meeting with the Baltimore County delegation, our coalition of advocates agreed to accept a hybrid bill with 7 board of education members being elected, one from each county council district, and 4 being appointed by the Governor from a list submitted to him of candidates who had been vetted by a special Baltimore County School Board Nominating Commission comprised of members appointed by various stakeholder groups, LWVBC being among them.  The Commission was to ensure that the Governor’s appointments were qualified candidates and that they represented the diversity of the County.  Finally HB384/SB290 was passed in the 2014 legislative session.  In 2016 HB88 was passed that refined some of the provisions of the original bill.   HB384/SB290 set the first Board of Education election for November of 2018.  Thus given the terms of the legislation, the first Baltimore County Hybrid Board of Education was not seated until December of 2018.

The full history can be read here.