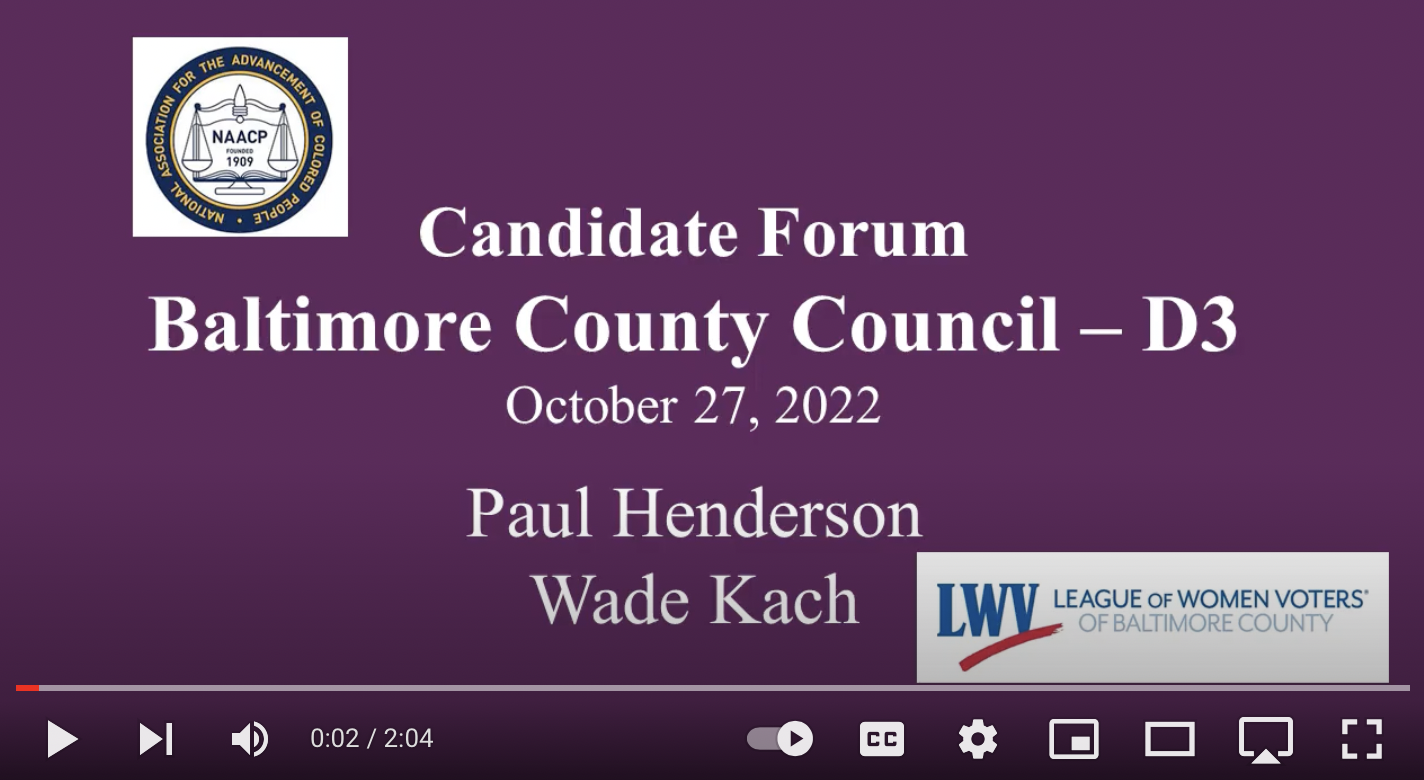 CANCELED The League of Women Voters of Baltimore County and the NAACP Randallstown branch regret that we were unable to hold our Candidate Forum for candidates running in the November General Election for County Council District 3. In accordance with our Empty Chair Policy, the League of Women Voters cannot hold a Candidate Forum when there is only one candidate present. Mr. Henderson and Mr Kach both confirmed their intention to participate in tonight’s forum. At this time, Mr. Kach is a no-show, so in accordance with League rules we must cancel the forum. We are deeply disappointed that residents of Baltimore County will not be able to hear from all the candidates in the General Election for this office. We are grateful to candidate Henderson who is present this evening, our moderator, Neilson Andrews, and to the other League members who planned to facilitate the forum. 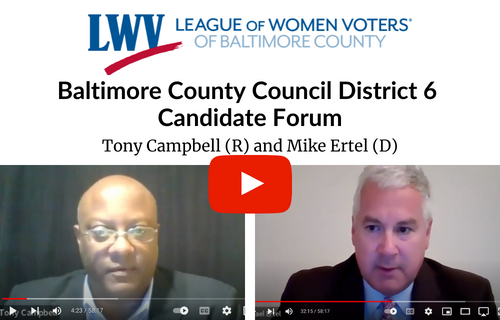 The LWV Baltimore County and the Randallstown NAACP hosted Tony Campbell and Mike Ertel for a District 6 Candidate Forum, 10/25/22. Watch it here. 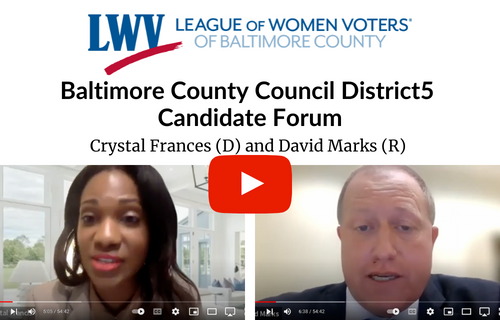 The LWV Baltimore County and the Randallstown NAACP hosted Crystal Francis and David Marks for a Candidate Forum, 10/24/22. Watch it here. 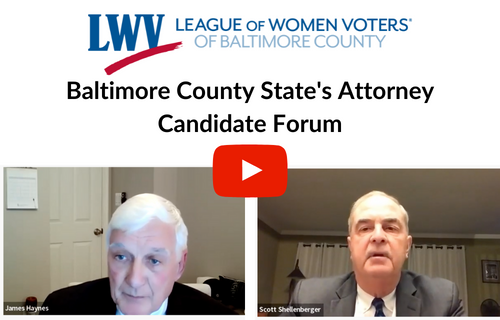 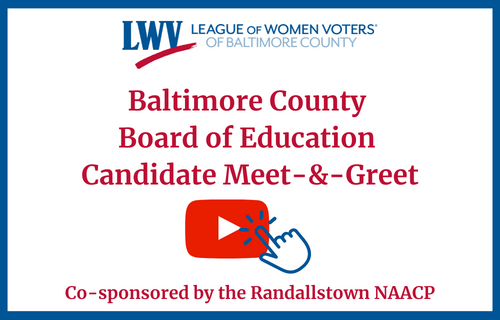 In preparation for the November 2022 General Election, Baltimore County Board of Education members are interviewed by LWV Baltimore County and asked questions submitted by voters. Watch the event here. 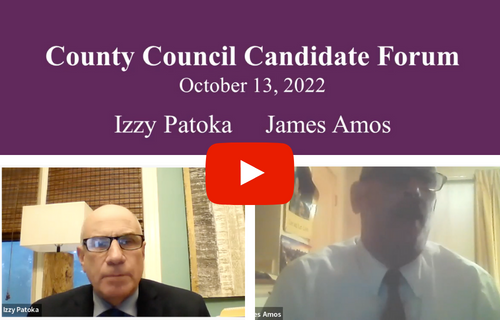 The LWV Baltimore County and the Randallstown NAACP hosted Izzy Patoka and James Amos for a Candidate Forum, 10/13/22. Watch it here.

The following races did not have Candidate Forums:

2022 Primary Candidate Meet and Greet: Baltimore County Board of Education

What can schools do to address the growing inequities in public education? Drawing on his experience in Texas and as the Maryland State Superintendent of Schools, Mohammed Choudhury will discuss how to increase opportunities and improve outcomes for students disproportionately affected by systemic barriers. He will describe how a multi-dimensional approach to assessing poverty and allocating resources narrows gaps in opportunity and learning.

Mohammed Choudhury became Maryland State Superintendent of Schools on July 1, 2021. He is nationally recognized for dismantling inequities in education and narrowing achievement gaps. Before coming to Maryland, Choudhury was the Associate Superintendent for the San Antonio Independent School District where he developed a new system to combat inequity – boosting the district from one of the lowest performing to the fastest-improving district in Texas. Education Week profiled Choudhury as a “Leader to Learn From,” and one of 12 exceptional school system leaders recognized for impacting student and teacher success. 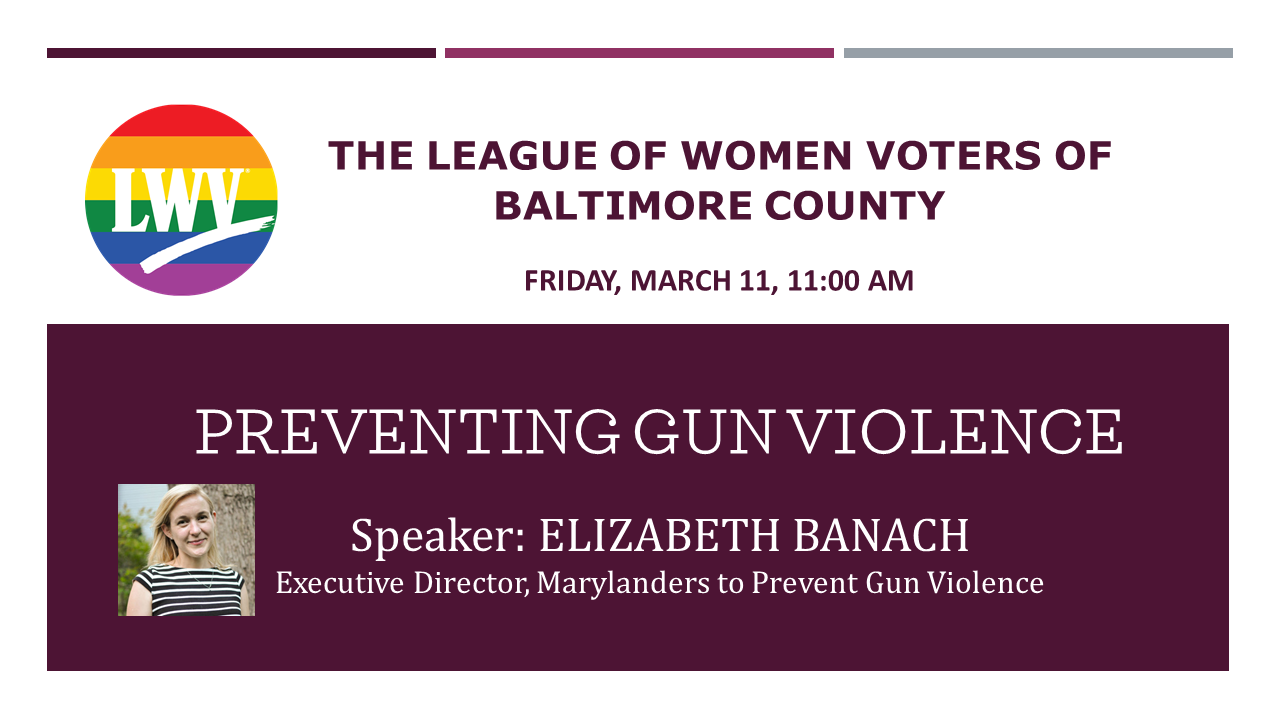 3/11/2022 Gun violence, a complex and multifaceted problem, is devastating families and communities across the country. Gun-violence prevention laws and interventions are effective at reducing this problem. Maryland’s General Assembly, a national leader in gun violence prevention, is currently considering legislation that would keep guns out of the hands of children (“Jaelynn's Law”), ban ghost guns, and restrict guns at polling sites. Elizabeth Banach, executive director of Marylanders to Prevent Gun Violence, will discuss the status of these important bills, as well as federal legislation introduced a year ago that would require securing firearms at home to prevent children gaining access to them (“Ethan's Law”).

Speaker: Elizabeth Banach is the executive director of Marylanders to Prevent Gun Violence. After the Sandy Hook school tragedy, Liz — a hunter’s daughter — knew it was time to speak out for evidence-based solutions to gun violence. MPGV works to strengthen gun violence prevention laws, support research on gun violence, and raise awareness of the problem. It focuses attention and resources on individuals disproportionately affected by gun violence: people who use a gun to commit suicide and young men and women of color living in urban areas.

1/8/2022 Each year before the General Assembly session, LWV Baltimore County invites all Senators and Delegates to share their priorities for the legislative session. About 16 legislators joined our 2022 meeting which includes a brief overview of the league’s legislative priorities, presentations by legislators (about 3 minutes each), followed with a Q&A with audience questions.

Special thanks to Baltimore County’s Senators and Delegates for taking the time to meet with us to share priorities and concerns for the 2022 legislative session.

11/11/2021 What is the state of democracy in America? Drawing on research on the collapse of democracies elsewhere, Professor Levitsky will discuss the key indicators of authoritarian behavior and parallels to American democracy. “Democracy no longer ends with a bang—in a revolution or military coup—but with a whimper: the slow, steady weakening of critical institutions, such as the judiciary and the press, and the gradual erosion of long-standing political norms." He will also discuss the threats posed by voter suppression and election subversion and how we can address these challenges.

The following events were sponsored by LWV Baltimore County and City Leagues.

The Importance of Open Space in Inner Suburbs and Cities

9/26/2021 Community green space increases the liveability, walkability, and sustainability of our neighborhoods. Our charge is to understand our history and what is necessary for change. An outstanding presentation that shows how we got here, and where we need to go, why this is critical.

Barbara Hopkins, lawyer and landscape architect, has a history of engaging in community service. She is a past president of the Friends of Maryland's Olmsted Parks and Landscapes which is committed to advance the Olmsted legacy and its relevance in Maryland. Currently she is the executive director of Neighborspace Baltimore County which helps add gardens, parks, and open space to increase communities livability, walkability, sustainability, and quality of life. As an expansion of her not-for-profit experiences and focus, her website, ChoosetoImprove, provides practical strategies, marketing, management, strategic planning, and fundraising, for growing and improving the viability of non profit organizations.

The Digital Divide: How Can We Bridge the Gap Between the Internet Haves and Have-Nots? 5/26/2021

Broadband Internet access has become a necessity in our increasingly Internet-driven society. Those without access to broadband service are at a severe disadvantage in accessing good jobs, virtual education, telemedicine appointments and much more. Alex Marré will explain the many barriers urban and rural residents face in accessing the Internet, as well as state and national efforts to increase access.

Alex Marré, Ph.D., is a regional economist at the Baltimore branch of the Federal Reserve Bank of Richmond. He monitors and briefs the public on regional economic conditions and conducts research on economic issues. Previously, as an economist at the U.S. Department of Agriculture, he tracked economic conditions in rural America. His research has informed the White House Rural Council, the National Academies of Sciences, the National Science Foundation, the Southern Legislative Conference, and the American Association of Community Colleges, among others. Dr. Marré holds a Ph.D. in agricultural and resource economics from Oregon State University.

Learn how the Biden Administration can fix the Chesapeake Bay cleanup effort and boost other environmental efforts around the U.S. Tom Pelton will lay out a politically challenging—perhaps radical—but necessary plan for the new administration, which must reverse the Trump Administration’s deregulatory efforts and deal with climate change and severe weather issues. The Chesapeake Bay is the nation's largest estuary, with a watershed that includes parts of six states and the District of Columbia.

Tom Pelton, an award-winning environmental journalist, hosts NPR’s "The Environment in Focus" since 2007. He is director of communications for the Environmental Integrity Project, a nonprofit organization dedicated to holding polluters and governments accountable to protect public health. Previously, he was a senior writer for the Chesapeake Bay Foundation and a reporter for The Baltimore Sun, where he was twice named one of the best environmental reporters in America by the Society of Environmental Journalists. Tom is the author of The Chesapeake in Focus: Transforming the Natural World.

Synopsis: Over the past 15 years, more than one in five U.S. newspapers has closed, leaving hundreds of communities with no local news outlet. In other communities, papers have been purchased by national firms without strong ties to their communities, eroding local coverage there as well. What happens to a community without local news? What efforts are being made to save local papers or provide alternatives? And what can we—as consumers of local news—do to help save our newspapers?

Speaker: Liz Bowie has been a reporter for The Baltimore Sun for more than 20 years, covering every aspect of education. Since joining The Sun in 1986, she has also covered environment, business, and state government news. A Baltimore native, she was a Spencer Fellow in Education Reporting at Columbia University.

Synopsus: Women are the fastest growing segment of the U.S. incarcerated population, increasing at nearly double the rate of men since 1985. Who are these women and what crimes were they convicted of? How can we address the problems they face during incarceration and the barriers to successful reentry? Towson University Professor Laura Hahn will address the facts — and the myths — about women and incarceration.

Vanguard: How Black Women Broke Barriers, Won the Vote, and Insisted on Equality for All - 11/10/2020

Synopsus: In the historic struggle for women's rights, including the right to vote, black women had to fight longer and harder than white women.  Dr. Jones discussed the many women who fought and continue to fight for equality for all. 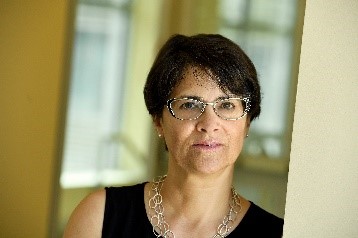 Speaker: Professor Martha S. Jones is a legal and cultural historian whose work examines how Black Americans have shaped U.S. democracy. Her recently published book, Vanguard: How Black Women Broke Barriers, Won the Vote, and Insisted on Equality for All, offers a new history of African American women’s political lives. She is also the author of Birthright Citizens: A History of Race and Rights in Antebellum America, which won awards from the Organization of American Historians, the American Historical Association and the American Society for Legal History. A frequent writer for broader audiences, her articles have appeared in The Washington Post, The Atlantic and other publications. Professor Jones holds a Ph.D. in history from Columbia University and a J.D. from the CUNY School of Law.

Synopsis: As participants in our democracy, we listen to polls and accept them as truth. There is much more depth to their creation and analysis.  Learn how polls in the  2016 and 2018 elections failed, and the changes being made in 2020.

As director of the Sarah T. Hughes Field Politics Center, Dr. Mileah Kromer oversees every aspect of the Goucher Poll, including survey instrument construction, sampling, data analysis, and the development of appropriate survey methodologies. In addition, she is responsible for interviewer training and lab supervision. Dr. Kromer also teaches courses on American politics and research methods and has appeared on national tv to discuss her expertise. Her research interests include public opinion, survey research methodology, and American state politics.

Defending Democracy from Disinformation: How to Protect the Election from Information Manipulation

Synopsis: Disinformation and manipulation of information causes discord, separates people into camps, and is difficult to combat, especially once ingrained. Learn how to defend democracy and talk with others who disagree with us.

Speaker: Bret Schafer is the Media and Digital Disinformation Fellow at the Alliance for Securing Democracy. As an expert in computational propaganda, he has appeared in The New York Times, USA Today, the Wall Street Journal, and The Washington Post, and he has been interviewed on NPR, MSNBC, CNN, Al Jazeera, CBS radio and BBC radio.

How to talk with friends and family