Quote from Anthony Fugett, a plaintiff and Baltimore County voter: “All we were asking for is a level playing field, and I am disappointed that the court did not level the playing field. The County Council continues to pack District 4 with over 64% Black voters, which leaves white voters in the majority in District 2. That means white voters in District 2 will continue to have veto power over the desires of Black voters, despite the west side of Baltimore County being majority Black.  That speaks volumes to me, and I hope that speaks volumes to all of my neighbors.” 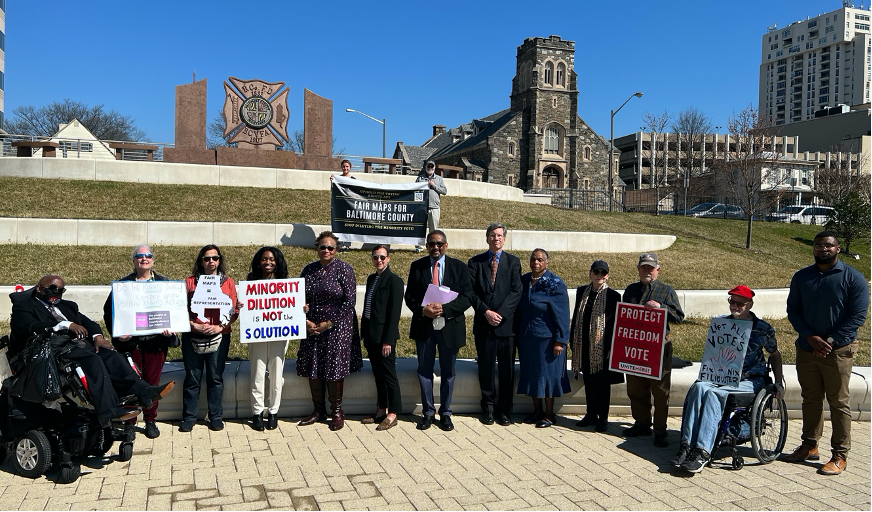 Friday, March 18, 2022
ACLU, LWV Baltimore County, and other organizations hold a press conference about the proposed redistricting plan.
Baltimore County voters and organizations call on the county council to stop aligning itself with Jim Crow Alabama policies and stop wasting taxpayer dollars defending a redistricting plan that still violates the racial justice protections of the Voting Rights Act. Despite a federal court order to create a second majority Black district (so that Black voters can elect a candidate of their choice) the Baltimore County Council’s proposed remedial plan does not afford BIPOC voters a fair and meaningful opportunity to elect their chosen candidates, which is in direct violation of the VRA. With a voting age population that is 30% Black and 47% BIPOC, it is unacceptable for Baltimore County to continue to have 6 out of 7 councilmanic districts be majority white voters.
Video:https://www.facebook.com/ACLUMD/videos/2902061023419122
Read more

LWVBCo has joined a group of ordinary citizens and advocacy organizations to gather up to 12,000 in-person signatures between March 4 and Aug. 31. This will allow the public to vote to amend the Baltimore County Charter to expand the Council size by four more Council  districts in the Nov. 8 election. This would increase the number of county districts from seven to eleven. This would also enlarge the Board of Appeals, Planning, and other boards.

The 4MORE! 4BALTIMORECOUNTY Ballot Issue Committee will hold a press conference Thursday, March 3 at 10 a.m. at  the Randallstown Community Center, 3505 Resource Drive Randallstown, MD 21133. Members of the public and LWV Baltimore County are welcome to come hear about the introduction of a nonpartisan effort to increase the size of the Baltimore County Council through a public petition to add a referendum question to the Nov. 8 election ballot. 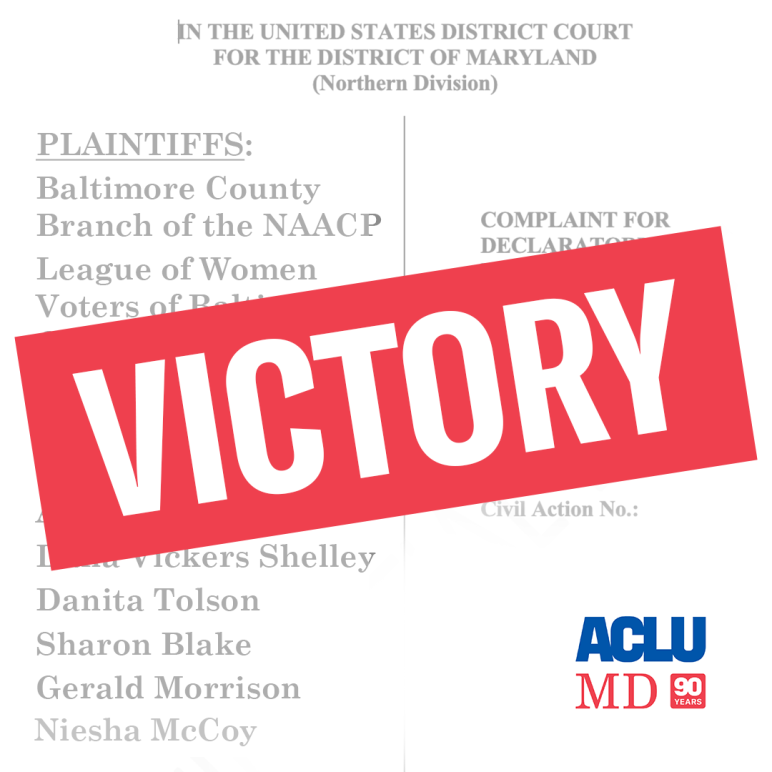 BALTIMORE COUNTY, MD – In the federal court challenge to an illegal redistricting plan, brought by Black voters in Baltimore County and several civil rights organizations, Federal Judge Lydia Kay Griggsby granted a preliminary injunction blocking implementation of the County’s plan and ordering them to submit a new plan that complies with the Voting Rights Act by March 8.

The following statement is on behalf of the plaintiffs and legal team:

“This is huge win for the many Black voters, community leaders, and civil rights organizations that challenged Baltimore County’s illegal redistricting plan. We are determined to ensure that a fair map is created with at least two majority-Black districts that afford Black voters a fair and effective opportunity to elect representatives of their choice. At every stage of this process, the community has been engaged, vocal, persistent, and timely in pushing the Baltimore County Council to do the right thing. These community voices, strengthened by Judge Griggsby's order today, are calling on Baltimore County leaders to be better than Alabama, to create districts that value the voices and representation of all residents. It’s time for Baltimore County leaders to stop wasting taxpayer money defending an indefensible plan that dilutes the voices of Black voters and refuses to embrace the strong diversity of the County.”

Police Accountability: An Open letter to our County Executive

After years of local advocates pushing for police reform and the subsequent public outcry after the murder of George Floyd and several local police misconduct cases in Baltimore County, the Maryland General Assembly passed the Maryland Police Accountability Act of 2021 [HB 670], which mandates a number of programs and procedures designed to improve transparency and accountability for police misconduct in Maryland. This act requires every County to establish a Police Accountability Board (PAB), an Administrative Charging Committee, and a Trial Board to oversee policing discipline.

Among that law’s impactful reforms is a requirement that every county establish a Police Accountability Board (PAB) to receive public complaints of police misconduct, appoint residents to the trial board and administrative charging committees, and make policy recommendations to improve police accountability.

Remember the good old days when the Post Office was just considered part of everyday life in America?  Mail came regularly, delivered by friendly postal workers whose biggest concern was watching out for the occasional barking dog.

Today, mail delivery is thought of very differently. Beginning in 2020, mail delivery changed direction under new leadership, and delays and lost mail had the country in an uproar. Although there has been spotty improvement, service problems have continued, including in certain parts of Baltimore County.

What does that have to do with our upcoming election? In truth, a well-run postal system is critical for voter confidence in mail in voting—services that are bound to be needed in Maryland for upcoming primary and general elections.

LWVBCo Legislative Luncheon: What to Expect in 2022*

While we missed being at the Woodbrook Baptist Church, our virtual Legislative Meeting went off without a hitch thanks to Sharalyn Luciani, Ericka McDonald and Neilson Andrews. The Legislators attending were also a great help in that they kept their comments to the specified three minutes each, which allowed for more questions and answers. More than 68 members, guests and state legislators attended the Zoom meeting.

What follows is a brief review of comments from the legislators who accepted our invitation to participate. To look up bills by number or subject, track bill actions, watch hearings, register to testify, and see the whole history including votes on bills, visit the General Assembly website at mgaleg.maryland.gov/mgawebsite/. To contact Baltimore County legislators, visit the LWV Baltimore County website’s resource page at www.lwvbaltimorecounty.org/resources to access the brochure, 2021 Your Elected Officials, for contact information.  You can find the complete discussion on our LWV Baltimore County youtube page.

BALTIMORE COUNTY, MD – Late Wednesday, Black voters and civil rights organizations filed papers urging United Sates District Judge Lydia Kay Griggsby to issue an injunction overturning Baltimore County’s racially discriminatory redistricting plan and requiring the County to reconfigure its election system in compliance with the Voting Rights Act.Arguing powerfully for why the plan should be blocked, the filing includes comprehensive expert analyses and maps from some of the nation’s top voting rights experts, an influential author and researcher on the racialized history of the Baltimore region, and a former NAACP president who has strongly advocated for civil rights in Baltimore County for over two decades. They explain how the County Council’s dilution of Black voters would illegally allow white voters, who make up barely half of the County’s population and will soon be a minority, to control six of the council’s seven seats for the next decade.

This case calls for a straightforward, yet urgent and critically important, application of Section 2 of the Voting Rights Act. Baltimore County’s burgeoning Black population (now 32 percent of the County’s overall population) and its Black, Indigenous, and People of Color (BIPOC) population (now 48 percent of the total) are sufficiently large and geographically compact to easily establish two majority-Black districts among the seven County Council districts, as well as a third “influence” district with population divided equally between white and BIPOC voters. Absent creation of these districts, racial polarization among voters will enable the white majority to override the will of minority voters and maintain Baltimore County’s nearly all-white government by diluting the influence of Black and BIPOC voters, discouraging Black candidacies, and preventing residents of color from electing their chosen representatives. . . . This is precisely the scenario Section 2 was intended to remedy.