This Legislative session LWVMD is proud to have submitted testimony on over 75 bills!  We could not have done all of this without our amazing advocacy teams.  Each team spent many hours drafting issue papers, writing and presenting testimony, listening to committee hearings and floor sessions and attending coalition meetings.  When appropriate they sent out Action Alerts calling for our members and supporters to contact their legislators to help move bills forward.

The full comprehensive End of Session Wrap Up can be found here.

Maryland lawmakers finished their annual 90-day session, working all the way up to the midnight deadline Monday.

Here is a glance at some of the measures the General Assembly passed this session:

Click on the links and they will take you to our written testimony.

Want to see what LWVMD has advocated for in the past?  Check out our testimony page.  We will be updating this weekly during the 2021 session!

We look forward to keeping you in the loop about what's happening in Annapolis this year! Also consider following us on Facebook and Twitter to keep up to date with events, action alerts, and other important information as it happens.

You may have heard that it’s Cross-Over time in the Maryland General Assembly.  This is when bills that originated in one chamber, pass that chamber and now it’s the other chamber’s obligation to consider passing them.  Bills that started in the Senate retain the SB label even though they have crossed over and are now in the House.  The same is true of bills that were passed by the House -they retain the HB prefix, even though they are being discussed by a Senate Committee.

Four of the bills that the League of Women Voters of Maryland and the Maryland Coalition for Justice and Police Accountability (MCJPA) support have passed in the Senate with amendments.  Now, it’s time for the House to hold hearings and vote on these bills. They were assigned to the House Judiciary Committee for a hearing on March 25th

The League submitted testimony to the House Judiciary Committee on SB 627  Law Enforcement Officers’ Bill of Rights (LEOBR) - Repeal and Replace, SB 626 Use of Force and SB 178 Anton’s Law.  We support SB 627 but asked that it be amended to remove the weakening changes made to this bill as originally submitted by the Senate sponsor. The Senate Judicial Proceedings Committee had removed citizen oversight of police conduct. We asked that SB 627 LEOBR Repeal be amended by the House Committee to allow communities to create real independent external community oversight boards with actual investigatory, subpoena and discipline powers. We also asked the House committee to remove the weakening amendments added to SB 626 Use of Force by the Senate Judicial Proceedings Committee and instead include the use of force language that the House Judiciary committee included in HB 670 Police Reform Accountability Act. We supported SB 178 as passed by the Senate.

The fourth bill that was sent to the House by the Senate, SB 786 Control of the Police Department of Baltimore City passed out of the Senate with a unanimous vote on the Senate Floor.  The fifth reform to policing that the League was supporting is to eliminate the $10 million annual subsidy that the state provides school districts to hire armed uniformed police officers to work in schools. The two House bills the we testified in support of were HB 1089 and HB 486. Neither bill received a vote in committee.  There was no cross-filed bill in the Senate.  Advocates plan to continue to educate legislators about this issue during the interim and come back with legislation and more data next session.

On the House side, most of the reforms we supported were incorporated in to an omnibus bill HB 670 - Police Reform and Accountability Act of 2021 that was submitted by Speaker of the House, Adriane Jones.  There were many good proposals in this legislation, but it fell short in some of the key areas of reform that the League and MCJPA are supporting.  We signed on to a letter asking for amendments to strengthen the reforms.  The section on Use of Force was amended to be a much better definition of what kind of force is allowable under what circumstances.  HB 670 passed on the House floor 96 yays to 40 nays. That bill will now be heard by the Senate Judicial Proceedings Committee.

It is likely that different versions of final bills will come out of each chamber. If this happens, the bills will be assigned to a conference committee that will propose a combined bill for passage.

“The League of Women Voters grieves the murders of the eight individuals who were killed on Tuesday, March 16th, and the countless other AAPI lives that have been tragically taken as a result of racially motivated violence. We mourn those who have lost their lives or been harmed, mentally or physically, as a result of anti-Asian xenophobia and racism.

“Anti-AAPI racism is not new to our country, whose history includes the creation of internment camps, the Chinese Exclusion Act which prohibited Chinese laborers, as well as countless acts of violence. Yet in the past year, we have witnessed a disturbing increase in attacks targeting AAPIs, often in connection with myths about COVID-19.

“Together, the League of Women Voters of the United States and the League of Women Voters of Georgia call on law enforcement officials to seek justice for those murdered on Tuesday night. Additionally, we urge Attorney General Garland and FBI Director Wray to prioritize the investigation of anti-AAPI hate crimes. We cannot fight the racism, hate, and impunity that threaten the lives of AAPIs unless our leadership takes the necessary actions to denounce racist violence and demand accountability in its wake.

"The League stands in solidarity with AAPI communities. We are committed to listening to and amplifying AAPI voices and educating ourselves on the historic and ongoing systemic racism that plagues this country so that we can be better allies.

“We urge our followers to do the same, and to call on elected and appointed officials at all levels of government to demonstrate their commitment to keeping ALL communities safe. There can be no liberty in the face of racist and xenophobic violence.”

Tell your delegates to support House Bill 222 — the Value My Vote Act!

In 2016, voting rights were restored to Marylanders who have been convicted of a felony, completed their sentence and are no longer incarcerated. However, no process was put in place to ensure that these citizens could exercise those rights, and many are unaware that they are now allowed to participate in democracy. In addition, Maryland citizens who are incarcerated awaiting trial or convicted of a misdemeanor are eligible to vote but don’t have access to voter registration forms and absentee ballots applications.

The Value My Vote Act (HB 222) requires election officials and correctional institutions to provide information and opportunities to register to vote, to apply for a mail-in ballot, to cast that ballot, and to return it in a timely fashion. Although voter registration may seem easy, people who have been separated from their community may need assistance with registration and voting. The bill’s sponsor, Delegate Wilkins, devoted many hours to meeting with stakeholders to craft a practical and fair process.

Last week the Ways and Means Committee passed HB 222 and it’s headed to the House floor any day now. Please email, phone, or tweet your representatives to ask them to pass this bill and send it to the Senate!

You can find the contact information for your delegates here:

Unlike the Senate, the House is considering a package of reforms that come in a single bill that was submitted by House Speaker Adrienne Jones. HB 670 Police Reform and Accountability Act of 2021 contains many good provisions.  But it is missing one key piece: Real independent external community oversight boards with actual investigatory, subpoena and discipline powers.  The good news is that Delegate Williams of District 22 (Prince George's County) is submitting an amendment that will fix this.

Below is a list of the Judiciary Committee members who need to be convinced to vote for her amendment.  Please contact them by email or tweet at them and tell them to support  Delegate William’s Amendment to make a critical improvement to holding police accountable. 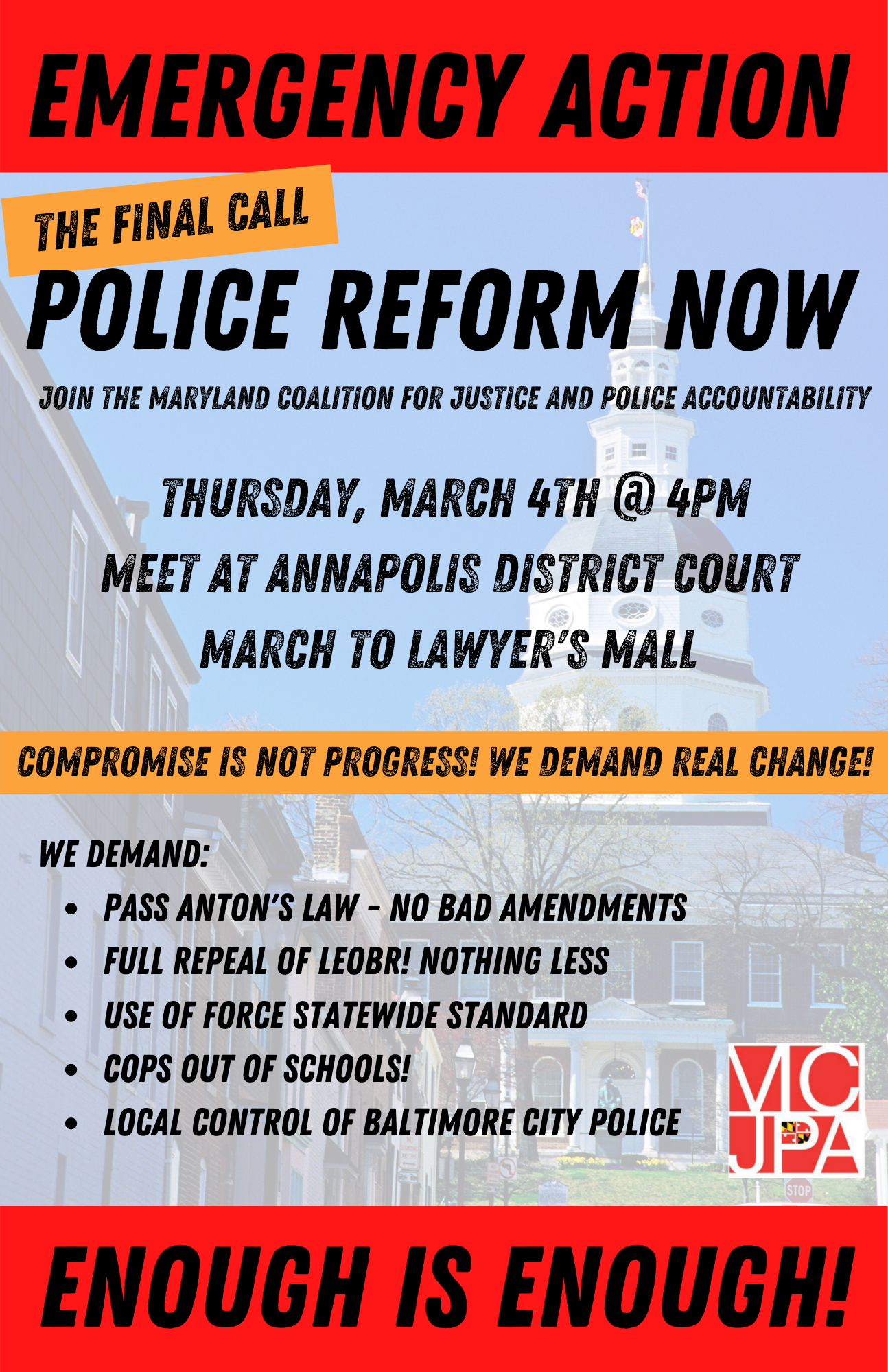 We are now deep into the work of the General Assembly Session, but the work to strengthen our democracy continues.

Please let us know if you have any questions or if there is any other way we could be supportive during this time.

Stay safe and thanks for your continued efforts and cooperation in these challenging times.

Want to see what LWVMD has advocated for in the past?  Check out our testimony page.  We will be updating this weekly during the 2021 session!

We look forward to keeping you in the loop about what's happening in Annapolis this year! Also consider following us on Facebook and Twitter to keep up to date with events, action alerts, and other important information as it happens.

Also don't forget about our virtual Legislative day Tuesday, March 2nd, 9:30am-12:30pm.  To find out more and purchase tickets click here or below.